The aim of this project is to test an approach to promote early conversations about values ​​and priorities for future end-of-life care.

Talking about death and dying can be difficult, but avoiding the issue risks leaving many people poorly prepared for their own, a close friend’s, or relative’s death. We encourage having these conversations before death is imminent, as we believe that those who are interested thereby can become better equipped to clarify their own and others’ preferences for end-of-life care.

Internationally, this is often called “Advance Care Planning” or “ACP”. In Sweden, however, developments in the area have been slower which led us to initiate this project.

The project is an action research project, which means that we strive to do research with people rather than on people. Apart from the researchers, the project includes other stakeholders, such as representatives from pensioners´ and patients´ organizations, listed below.

Two tools to facilitate conversations about end of life have been developed and used in the project. These are the Ecomap and the DöBra cards (DöBra Kortleken).

The Ecomap facilitates discussion about the question “Who is important?”. It is used to chart the person’s social network to understand who may be important for the person at the end of life.

The DöBra cards support discussion about “What is important?”. The cards, developed by Elisabeth Menkin and spread by Coda Alliance, a non-profit organization in the United States, have been translated and adapted to the Swedish context by the Swe-ACP project team. The Swedish version consists of 37 cards with printed statements about what could be important in the end-of- life, for example: “To be free of pain”, “To have my financial affairs in order”, or “To have those I am close to around me”. There are also ‘wild cards’ to add your own statements. The cards can be helpful for reflection and conversation with others, e.g. friends, relatives or caregivers, about what aspects of the end-of-life might be important.

After translating and adapting these tools, in 2015 we began to interview people who were not terminally-ill about their values ​​and priorities for future end-of-life care. The participants were recruited through our collaborating organizations, and those who were interested in participating actively contacted us. Follow-up interviews have also been conducted with nearly all of the participants 6-12 months later. A first article about the project has been submitted to a scientific journal and an article on the second study on how participants’ reason about the end-of-life in these interviews is in manuscript.

The thesis from the project (in Swedish, with English summary) has been published here.

Title: Same, same, but different? A longitudinal, mixed-methods study of stability in values and preferences for future end-of-life care among community-dwelling, older adults

Published: In the journal BMC Palliative Care in september 2021.

Title: Dissemination, use, and impact of a community-based, conversational advance care planning intervention: Ripple effects of the Swedish DöBra cards

Published: I the journal Palliative Care and Social Practice, August 2021.

Published: In the journal The Gerontologist, March 2020. 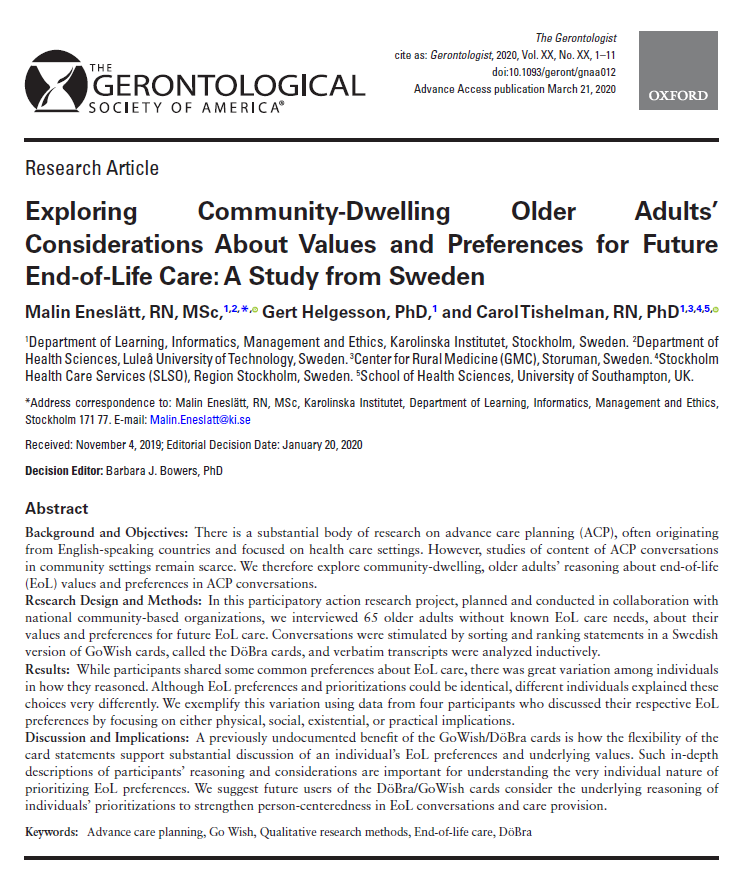 Title: Developing and using a structured, conversation-based intervention for clarifying values and preferences for end-of-life in the advance care planning-naive Swedish context: Action research within the DöBra research program. 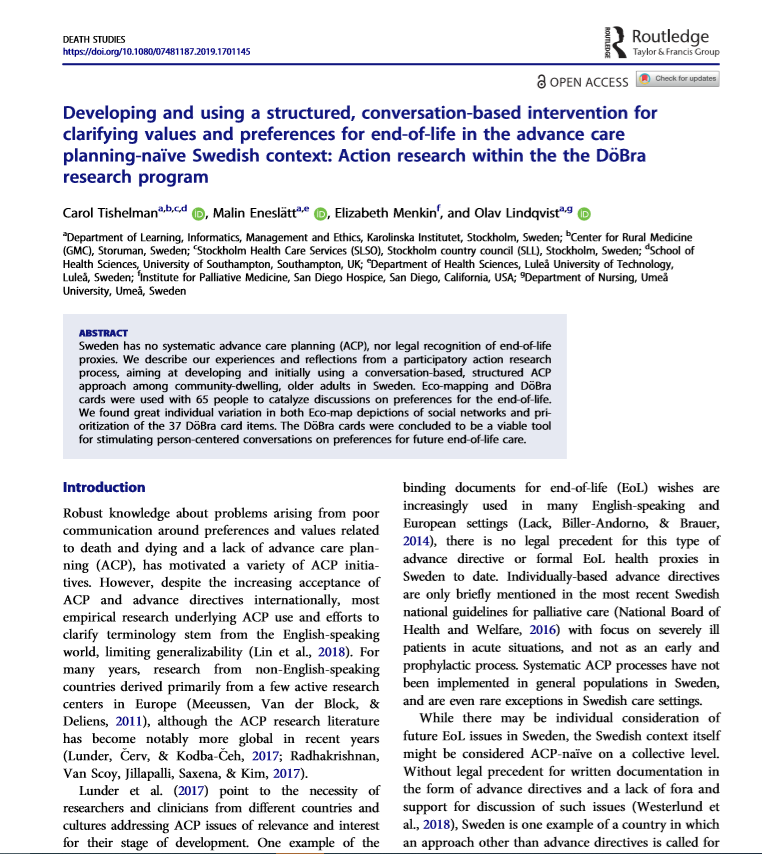 The poster has been shown at the ACPEL conference 2017 and the Advances in Health Care Sciences Research Conference 2017.